As I reflect on my long and interesting nursing career, I realise that I am actually a very small piece of nursing history. At the time I did not appreciate this; I was just doing a job I loved.

From 1919 when State Registration for nurses became a reality, it became a prerequisite for District Nursing. However it was 62 years later before District Nurse Training became mandatory for practice as a District Nurse (DN). I was too young to remember the start of the National Health Service (NHS) in 1948, but as a young person commencing State Registered Nurse (SRN) training in 1962 I did not appreciate that the NHS was but a teenager of only 14 years existence. During my SRN training, I spent a day with a Health Visitor and a day with the ‘Drain Man’: hardly encouraging preparation for my subsequent career in the community.

In 1973 I started work as a District Nurse, successfully completing my 16 week training one year later. In 1976 I became a Practical Work Teacher (PWT) and taught many student DNs the practical aspects of district nursing. Because I enjoyed the teaching role, I was encouraged to become a District Nurse Tutor and successfully qualified in 1980. The next 17 years were spent in education, firstly working for the Lancashire Area Health Authority, then the local Polytechnic to where DN training was transferred when the Area Health Authority disappeared in 1982. The Polytechnic is now the University of Central Lancashire where it still undertakes many DN related courses.

In 1981 District Nurse Training became mandatory to practice and every District Nurse Tutor in the country had to attend a week’s course in preparation for the many changes taking place. The course coincided with the introduction of the nursing process as a new approach to nursing care, so that had to be incorporated into the course – there was so much to learn in a very short space of time.

In 1992, the University failed in its tender to retain District Nurse Training, which by then was at degree level. I was approached by many District Nurses to provide a part time course for District Nurses who had a certificate or diploma DN qualification, so they could upgrade their knowledge to degree level. This was successfully implemented as an honours degree in Community Health Studies, was well attended and filled a gap in District Nurse education. I still meet many district nurses who remember me and I am proud to think that when I retire, I will have shared my knowledge and expertise with so many people and it will be passed on to future District Nurses.

When District Nurse Training in Lancashire transferred into higher education, we tutors took with us several historical documents and as the last qualified District Nurse Tutor to leave the University, I salvaged a very important book of District Nursing history. This has been donated to the Queen’s Nursing Institute and is now in their archive, where I understand it is regularly accessed for historical information and interest.

The book is a record of the district nurses and midwives who served the population of the ‘old’ County of Lancashire from the turn of the 19th century until just before the coming of the welfare state in 1948, listed by the local Nursing Associations they worked for. Each Association is listed in alphabetical order page by page and includes areas no longer in Lancashire such as Garston (Merseyside) and Vickerstown (Cumbria). Earby, now in Lancashire, is not mentioned, so presumably at the time of the records it was in Yorkshire.

Each proforma page invites the same information, but of course the nature of the information given is very different. It is possible to identify the likely health status of the districts, which varied from industrial to rural. Many districts, particularly in rural areas, had a nurse undertaking the dual role of district nurse and midwife.
The proforma page allows for inclusion of ‘reason for leaving’, marriage being one on them! It also gives the nature of transport, mainly walking or bicycles, but in later years the rural ones indicated the use of a car.

This book is well worth perusing if you are in the vicinity of the Queens Nursing Institute in London and are interested in District Nursing history; I sincerely commend it to you.

An example from the book is Adlington. It records that the nursing association there was founded in 1905 and affiliated to the Queen’s Institute in 1908. It had a population of 6000 and was characterised as ‘urban and cotton mills’. Support came from ‘Subscriptions, donations and house to house collections, workpeople’s hospital fund.’ Staff and arrangements are listed as ‘One Queen’s Nurse. Two furnished rooms – bicycle provided.’ 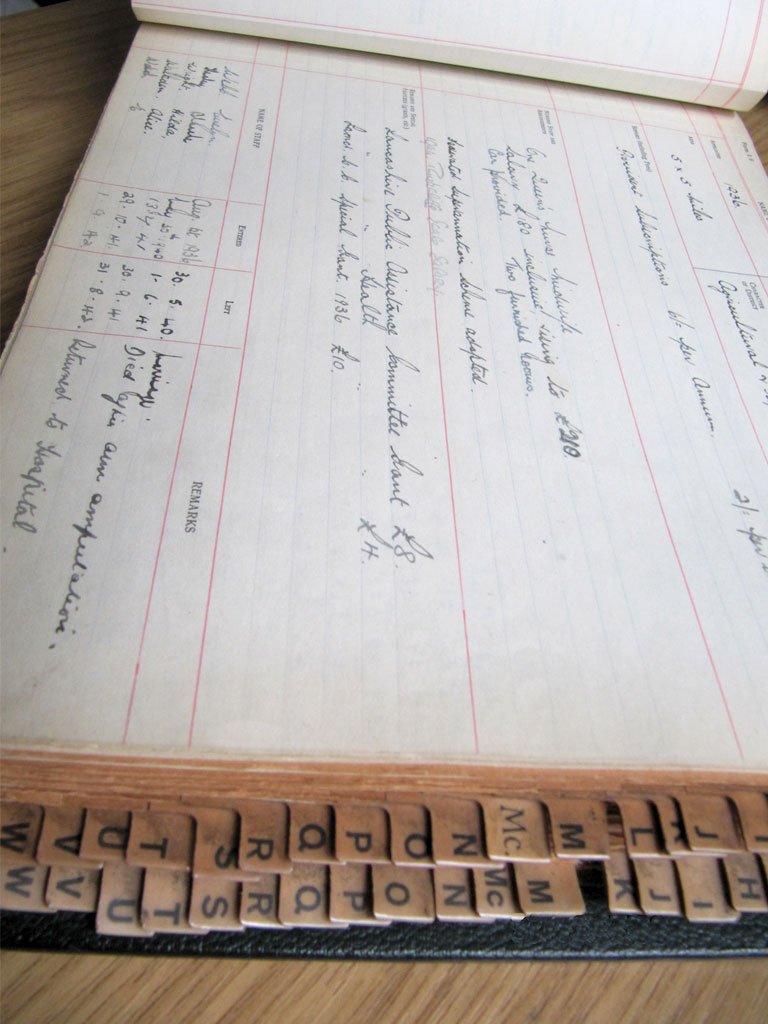