World War IAccounts of District Nursing during the Great War.

From the October 1914 Editorial:

“Since the issue of the last Queen’s Nurses’ Magazine great and terrible events have come to pass. Three months ago little did we dream that the subject of our next editorial would be concerned with the work of Queen’s Nurses in time of war.

“…everywhere Queen’s Nurses are in request for special work, in addition to their own duties, heavily increased as these are and likely to be during the coming winter. For suffering through the war is not confined to our soldiers, and their families, but is felt acutely in unemployment and consequent privation, sickness, and general misery in every corner of the land…

“A large proportion of Queen’s Nurses are now working in Territorial Hospitals….But one and all are cheerfully accepting the situation, remembering that they too are soldiers of the King and must submit to discipline….Very thankful we must all be that our splendid Navy is standing between us and the torture and misery that has descended on Belgium and France.”

Nurse Tait McKay wrote from Plymouth where she was acting as Matron of the Fourth Southern General Hospital. “The business of transforming Salisbury Road Schools and the adjacent Baptist Church into a War Hospital of 520 beds was completed on August 20th and patients were admitted from the adjacent forts.” The staff consisted of a matron, twenty-two sisters, sixty-eight nurses and two masseuses. Seven of the nurses were Queen’s Nurses. “The first batch of 102 wounded warriors arrived from the Front on August 21st, forty of those were stretcher cases, and as soon as the news leaked out considerable excitement prevailed…The second batch numbering all 132, including fourteen Germans, arrived on September 25th.” The school was equipped with operating theatre and X-ray machine and was every ward was occupied, 4-500 patients in all.

At Brighton the Second Eastern General Hospital was established at the same time, in Brighton Grammar School and a quarter or more of the one hundred nurses were QNs. 520 beds in thirty wards were prepared and soon the first convoy of 300 hundred wounded arrived from Mons on September 1st. The October magazine is full of news from Queen’s Nurses from all over the country describing how their local organisation is adapting to the war effort.

The First Eastern General Hospital was established in Trinity College, Cambridge. Other colleges were also requisitioned. Five hundred beds were originally planned but this had to be increased to 1500.

In January 1915, Queen’s Nurse E. M. Vicary described how Scarborough came under shell fire from German ships on December 16th. L. Ethel Nazer describes nursing Sikh and Gurkha wounded at Netley. She wrote, “Five out of the last twenty were hand and arm wounds and these walked in; the other fifteen were all heavy stretcher cases; some had six or eight wounds from shrapnel and three were badly frost-bitten; one has since died, another developed tetanus and several amputations have had to be done; all the wounds are horribly septic on arrival but it is surprising how quickly they clean up with regular dressing and attention…There is one little Gurkha in my ward who has lost both eyes but  he sits up in bed and sings away in their quaint droning fashion and in fact he is quite the life of the ward. I asked interpreter one day what he was singing as I so often caught the words ‘Sister Sahib’ and he he said it was a kind of chant that the Sister Sahibs had been a mother to him and that he would always think of us and pray for us when he got back to India.”

April 1915. Miss Ethel Ubsdell, QN, reporting from the Friends expedition to Chalons-sur-Marne. “Hearing that a certain village had been severely bombarded I started off in the car to see if help was required. We called on the Mayor of the place who told us that a certain woman was expecting her baby and gave us directions to where we should find her. We arrived at the place and found one wall of a house. I went in to investigate but could see nothing. I went a little further and found a sort of scullery place with a hole in the ground…We advanced to the hole and found a sort of rope ladder…We alighted in a black hole and fell over some children, three of them, ranging from 5 years of age down to 2 years. Hearing another moan from a corner and found the poor mother lying on straw, having given birth to a child about an hour previously. Both the mother and the children were covered with vermin…[we] carried the whole family up to the car, and conveyed them off to the hospital. I am thankful to say that the mother and infant are doing well, and the children are none the worse for their experience. The husband of the poor woman we found had been taken prisoner of war.”

In January 1916 the Queen’s Nurses’ Magazine reported that nearly 500 QNs were now on active service. It also reported that due to the almost total disappearance of unemployment, poverty, crime and ill health were also falling. Some accounts from Queen’s Nurses serving in Salonika and Serbia are also included, as well as a dramatic account by Miss Georgina Pennant of being onboard a liner as it is torpedoed in the Mediterranean.

Another anonymous QN wrote, “We embarked at Southampton on November 9th – seventy-five strong, for work in the unknown – our destination being ‘Eastern Mediterranean.” From Naples they travelled to Lemnos where “We took on sick and wounded – over 800, a large number being frost bites – all of them being in a deplorable and verminous condition. We voyaged with them to Malta…two days out from Alexandria we picked up two torpedoed crews of British merchant vessels, they had been in boats from 4 o’clock to 7 o’clock and hailed us with great joy, only two men were lost and two injured.”

They finally arrived at Salonica on December 15th to a field hospital of 1040 beds. She writes, “It consists entirely of tents, each tent containing fourteen beds, a large table which has to do duty alternately for meals, dressings, etc. Each ward is the proud possessor of a Premier stove and an urn…The floors are covered with tarpauling. Lighting throughout the camp is by means of hurricane lamps…”

“When we first came we found the hospital full of men belonging to the 10th Division, either suffering from wounds received during the retreat to take Doiraz, or frost-bites…On the medical side rheumatism and pneumonia has prevailed… We have a well equipped theatre…we also possess an X-ray department…”

The anonymous nurse also describes the beauty of the setting, the distant view of snow on Mount Olympus. “The surrounding hills are clad in a wondrous purple hue, while beauty and peace seem to emanate throughout the scene, and a few miles away are all in terrible preparation pertaining to modern warfare.”

She concludes her letter, “The life is intensely interesting, healthy and invigorating. To a certain extent it is unsettling, and one wonders what ordinary life in England will appear like afterwards.”

“Miss M. Urquhart writes from a National Shell Filling Factory: “ My new position is distinctly welfare work among the women and girls here, and the duties comprise the engaging of suitable overlookers; investigations of complaints of the workers; cases of dismissal; keeping records of broken time; general supervision of working conditions during day and night and of canteens and rest rooms. I am also in close co-operation with nurses and doctors regarding the physical well-being, cleanliness, clothing, etc., of my 3,000 girls.””

Miss E. M. Bridges, Nursing Superintendent for England, wrote of her experiences in France, first in a field hospital near the front ‘where many clever operations were performed’ and then in a fever hospital on the coast, treating typhoid or ‘para-typhoid’ cases.

Miss Mary E. Stevenson was on the hospital ship Asturias when it was torpedoed on 20 March 1917. Thirty one people lost their lives but the death toll could have been much higher as hours earlier there had been 900 wounded on board. She writes from a Military Hospital, “I have been a patient here nearly a week; I was brought on a stretcher on Wednesday (21st) and am gradually recovering from a great shock. Our lovely ship was torpedoed at ten minutes before midnight. I thank God with all my heart that our patients had been taken off a few hours before, or the death toll might have been great. That I should be alive fills me with gratitude and amazement; our little boat was capsized as soon as we had been lowered into the water; everyone was flung out and we rapidly drifted away. After a time of darkness and icy cold and horror, I mercifully became unconscious; how long I drifted half drowned and unconscious I shall probably never know. It seems the men on a patrol boat on the look out for survivors saw me. They got me aboard, and though I appeared dead, persevered with artificial respiration, massage, and heat for between two and three hours. I owe my life to those men, and the people here have continued the good work. Such cold I have never known before, but they applied heat day and night, and I am much better and sitting up now. I have a very bruised eye and many bruises elsewhere, but I am so grateful to be alive. Most of the people in the little boat with me were lost. It is so sad for their friends.”

In July 1917 yet another torpedoing is reported by Miss Meirion Evans. She wrote, “Our ship was torpedoed at 10 am and sank in an hour. The nursing staff (66 of us) were the first to be lowered into the life boats, and were in our boat for three hours, when we were picked up by an ally’s destroyer. The last hour was dreadful as the boat was full of water and we had to stand up and cling to one another to do anything we could to get hold of. The sea was so rough by this time that the wavers were coming right over our heads at times, and two or three nurses were washed away, but a splendid sailor boy rescued them. They said the boat would have floated forever, but I am afraid in another half hour we should have been done up. We were at last landed and stayed in convents, the people were very good to us.”

Miss Eleanor Smith wrote from Salonika, “I have met such a lot of Queen’s Nurses I met in Cardiff, and it is so nice to see them. I get the Magazine, which I enjoy intensely. Some of the Queen’s Nurses are doing refugee work just now, and they are certainly the most suited for such work, especially where midwifery is concerned.”

At the end of the war some 600 Queen’s Nurses were still on active service. 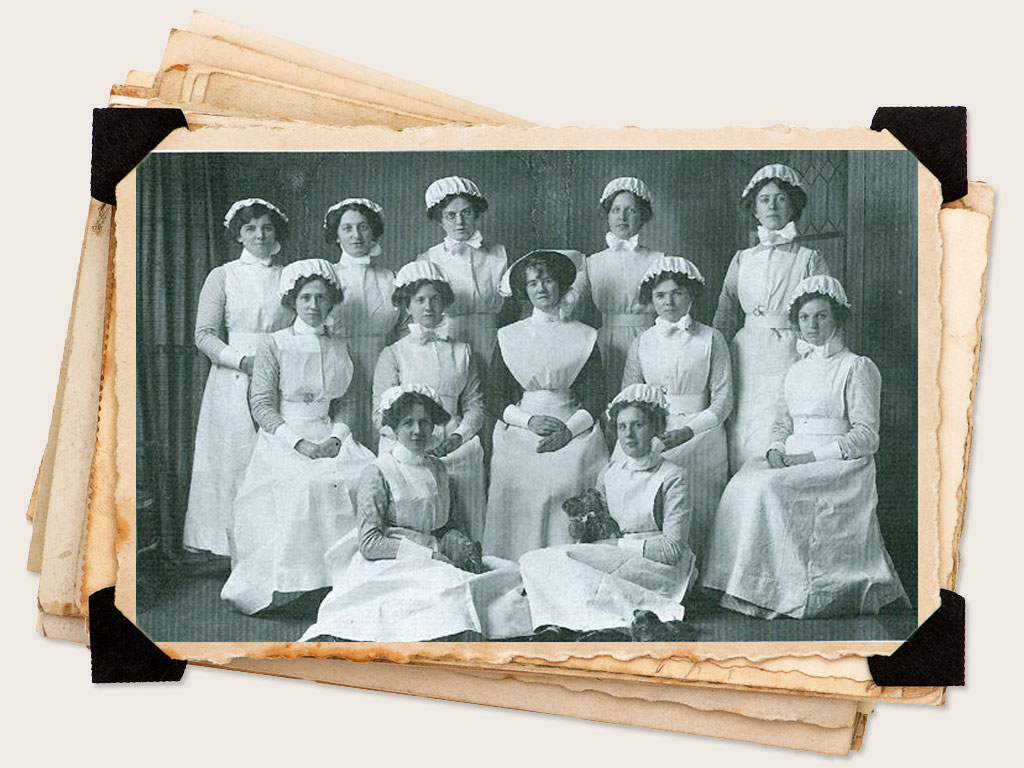