“After making more or less elaborate preparation for three years’ soujourn abroad, the day arrived when I must leave Old England behind and sail for these Islands of Bermuda, knowing little about them or the work awaiting me there, and nothing at all about sea voyages.

“It was quite early one morning when we sighted St. David’s Lighthouse on one of the Bermuda Islands. We sailed slowly round the dangerous reefs to the entrance to the harbour….then a tug boat came for us and with it the Hon. Secretary of the Bermuda Nursing Association, who talked to me of my new work as we steamed along through the small islands dotted about the harbour.

“The nurses were all out on the verandah to receive and bid me welcome. …There is a white baby in the Home; he had been taken in at four months old as his mother died at his birth. His father was a soldier. I never heard a baby cry so much…

“The nurses had been left to themselves for many months and did not appreciate the changes I found it necessary to make. The work is not done in the orthodox way, still the plan adopted seems to work very well on the whole. The cooking is also done by the nurses, each taking a week in turn…the work in the Home and on the district is often very acute and interesting. The Association supplies a nurse to attend soldier’s wives during puerperium, at the Garrison, St. George’s Island…

“A few months ago we were very busy, especially on one particular day. In one ward was a case of acute ophthalmia…in another a helpless woman, suffering from elephantisis and eight of the worst possible bed sores, then there was still the white baby who was here when I came. He is a dear baby and running about, but takes up most of the time of one nurse. There was also the district to think of, which included five infirm and helpless old ladies. We got through the day very well and the thought of rest was good, but at 9 pm a maternity case was brought in, so I stayed up with the night nurse. The patient was a white woman, primipara. The baby was born at 2 am, very tiny and premature, but the mother did very well. The next day’s work had nicely commenced and we night people thought of going to bed, when an urgent telephone message came from St. George’s Island saying, “Please send a nurse at once.” …we started the twelve miles drive, which is very pretty, being nearly all the way by the sea, with its wonderful shades of green and so clear. When we reached St. George’s Island, there was nothing left for me to do, as the baby was born, so I left nurse to do what was necessary….

“The reefs on this side of the Islands are very dangerous, and it is generally believed that ‘The Tempest’ by Shakespeare, was written after he had heard the thrilling tales told by his friends, about the wreck of the ‘Sea Venture’ on the reefs of Bermuda, and what perilous times they passed through, narrowly escaping with their lives.

“I have a blackboard and teach the nurses very elementary anatomy, physiology, hygiene, midwifery, and nursing by practical demonstrations. The nurses are very interested in the classes.

“We are practical on other ways as well. The other week, not having much to do, we washed all the mosquito nets, each about seven yards wide and nearly four long. My part consisted of carrying about two buckets full of water, and helping to hang the nets by their tapes on the high branches of the cedar trees, and very nice they looked, floating about in the breeze and the sunshine.

“Phthisis is very prevalent here, which is no wonder when one sees how they shut themselves up. The cottages are built without chimneys, and many not only close the windows but the shutters as well, keeping out air, sunshine and light.

“Last year there was a patient on the district suffering from acute rheumatism…. We entered the family bedroom, and on the bed was lying the sick woman, unable to move hand or foot. There were two double beds in the room and hardly any space left between. The windows, blinds and shutters were closed and a kerosene lamp was burning to supply the shut out light, or rather in place of the daylight. Four children had slept there besides the mother. Imagine the atmosphere. It was stifling. We opened up the place, put out the lamp, and nurse spent a few hours there, washing the mother and babies, then by degrees the room was made tidy. After a long illness the woman made a good recovery.

“When anyone dies the interment takes place the same day. A pillow made of sweet herbs is usually placed under the head and the best dress or suit is used instead of other things.

“One popular remedy for fever is to kill a pigeon and bandage half to each foot of the patient, while it (the pigeon) is still warm.

“When there is no moonlight it is very dark and lonely round the Home, and some people prowl about trying to frighten others or worse, by interfering with the shutters, hiding in the shadows, and sometimes firing revolvers. It is not an easy matter to catch them either as they can easily disappear in the bush. By chance I have a loaded revolver which was bought here in a patient’s coat pocket. As the man could be fined for carrying loaded firearms, the revolver remains in my possession.

“The Association is supported by the earnings of the Home, private and military cases, and the different societies…whose members subscribe two shillings annually, also Church collections, etc.

“The principal recreations are swimming, rowing, canoeing, driving and riding. People do not go out much in the evening except when it is moonlight, which is generally beautiful and brilliant. Maiden-hair ferns grow out of doors, banana plantations are plentiful; cocoa palm, palmettos, lilies, roses and other flowers flourish abundantly.”

From The Queen’s Nurses’ Magazine, August 1909. 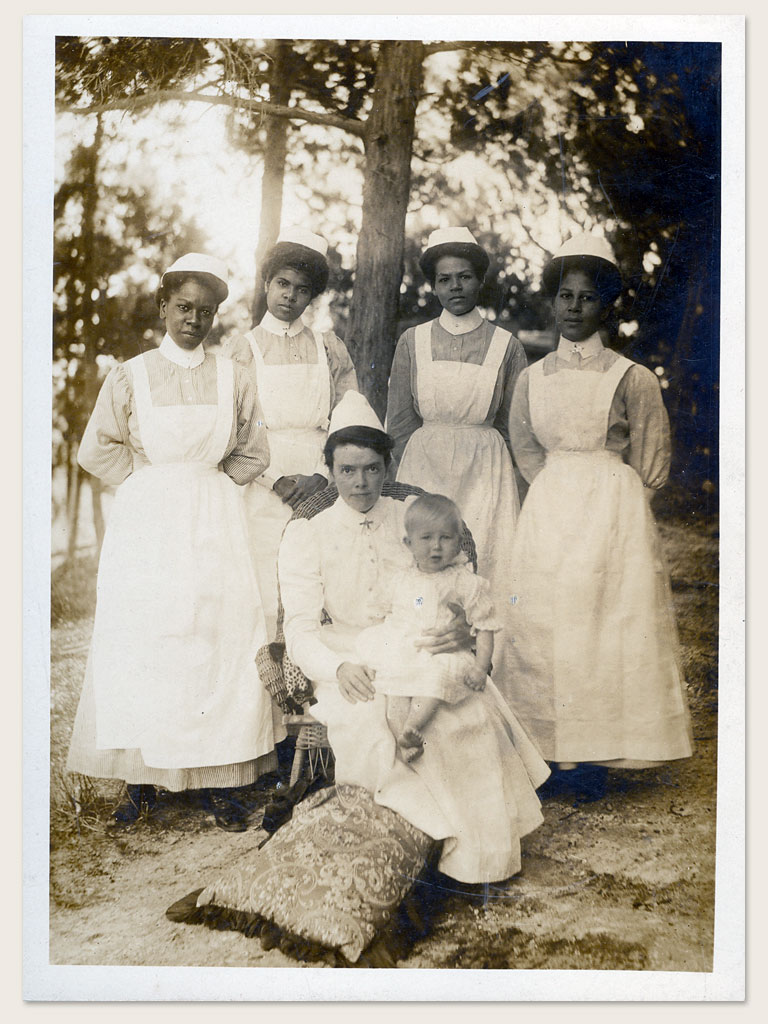