Margaret FisherMargaret started as a sewing maid in Wigan Infirmary.

Margaret started as a sewing maid in Wigan Infirmary, before working as a nurse attendant in an asylum in Nottingham. She trained as a nurse at Kidderminster Hospital, rising to become head nurse at the children’s hospital. She moved to London and was night charge nurse in the Hampstead Workhouse Infirmary for a year before training at Queen Victoria’s Jubilee Institute for Nurses and becoming a Queen’s Nurse in Birmingham.

‘I have much pleasure in according unreserved testimony as to the character of Margaret Fisher. I have known her for a number of years and she always commanded the respect of those who knew her. From my own observations I should imagine that she is well suited to occupy the position of Nurse in a Hospital and trust that her application will be favourably received.’

Reference (undated) from a Matron of The Royal Albert Edward Infirmary and Dispensary, Wigan:
‘MF has been with me as sewing maid for the last X months and it gives me very great pleasure to say that I consider her a thoroughly good principled girl, most industrious careful and conscientious in her work, civil and respectful in her manner. She is a good plain dressmaker and I can unhesitatingly recommend her for a similar position to what she has held here. The reason for her leaving me is that she is anxious to be trained as a nurse and she has secured a vacancy in another Hospital. I wish her every possible success in her new work.’

‘The applicant Margaret Fisher I have known since she came to Wigan. She has attended our Chapel and she has been exemplary in her conduct and I fully believe you will find her kind, careful and attentive to her duties as  nurse and will merit your confidence and approval  should you give her the appointment.’

‘It gives me great pleasure in expressing the favourable opinion I entertain of the character and abilities of Nurse Fisher. During the time I have known her I have found that she is of a genial disposition, very kind and attentive to the sick. She is in my opinion will suited for any post as Nurse Attendant, and it is with confidence that I recommend her for such a post.’

‘I hereby certify that Margaret Fisher has been a nurse in this Asylum since March last, and during the greater part of this time has been employed in the Infirmary ward, so that she has had experiences in sick nursing as well as in nursing the insane. She is steady, sober, honest and industrious.’

‘I have much pleasure in stating that I have known Nurse Fisher during the time she has been acting as nurse at the Kidderminster Infirmary & Children’s Hospital and that I have been much struck by excellent way in which all her duties have been performed. Latterly she has filled the office of head nurse at the children’s hospital and has shown herself in all respects excellently well fitted for the post. I can also testify to her having a thorough knowledge of the theory of nursing.’

‘I have greatest pleasure in testifying to the careful and painstaking manner in which Nurse Margaret Fisher has performed her duties during the three years and two months she has worked in this Hospital. She has been very conscientious in the discharge of her duties, kind and attentive to her patients, pleasant to her fellow nurses, and obliging to those under whom she worked.’

‘Nurse Fisher has been at the Kidderminster Infirmary & Children’s Hospital several years. She is a thoroughly practical nurse and one I can recommend with every confidence.’
14 January 1895 – reference from W Hodgson Moore, Hon Surgeon, Kidderminster:

‘I have seen much of Nurse Margaret Fisher during her training in the Wards of Kidderminster Infirmary & Children’s Hospital and can testify to her practical knowledge of the duties a nurse may be called upon to perform. Nurse Fisher has nursed patients to my entire satisfaction and showing a considerable amount of kindness in dealing with her patients. I wish her every success in her application for post as charge nurse.’

‘Nurse M. Fisher has been night charge nurse for the last 12 months at this Infirmary, and during that time I have found her a satisfactory nurse and careful in the discharge of her duties. I consider her well trained in both medical and surgical nursing, and she has had routine charge of the sick wards at night, with 3 assistant nurses under her.’

‘I hereby certify that Nurse M. Fisher has been night charge nurse at this Infirmary for the past 12 months and during this time she has done her work most satisfactorily. Previous to coming here she had 3 years training at Kidderminster Hospital and is thoroughly efficient and trustworthy.’

27 February 1896 – Certificate of Character from Parish of St John, Hampstead, Guardians of the Poor.

Gap: Feb 1896 to July 1897 – after this interval Margaret must have started her 6 months Queen’s Nurse Training

1 January 1898 – Notice of Appointment as a Queen’s Nurse, from Queen Victoria’s Jubilee Institute for Nurses. 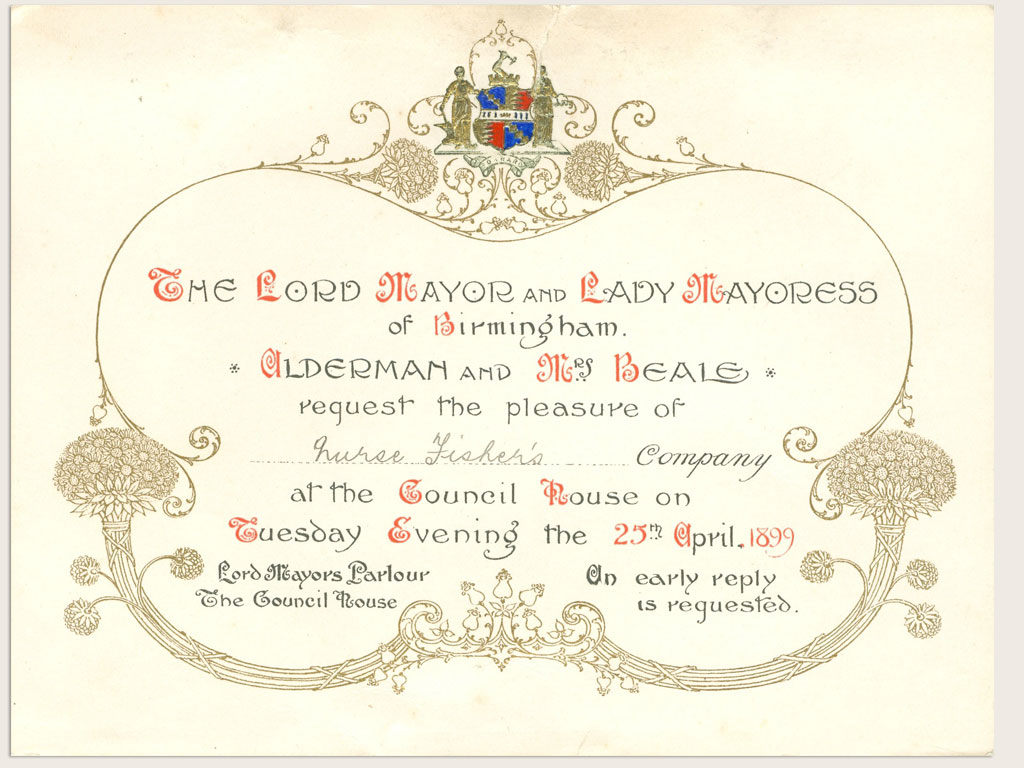 25 April 1899 – Invitation to an evening event with the Lord Mayor and Lady Mayoress of Birmingham, Alderman and Mrs Beale, at the Lord Mayor’s Parlour, The Council House. Addressed to Birmingham District Nursing Society, Newhall Street. 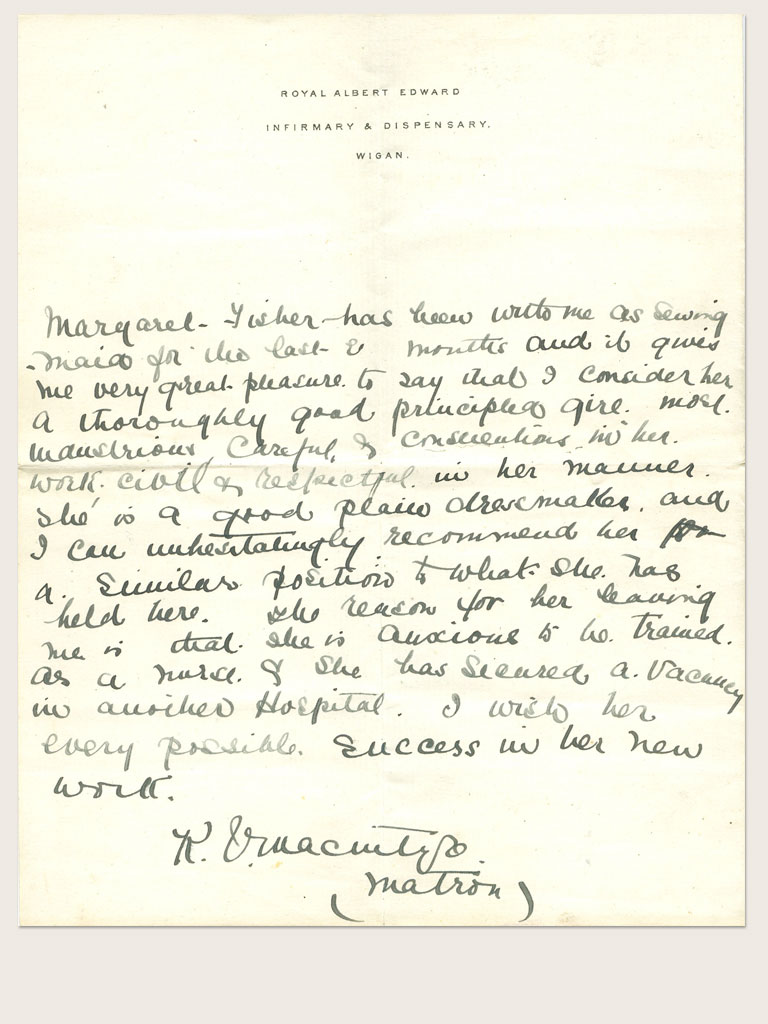