Miss Nightingale was, after she carried her points, the subject of so much sentimental enthusiasm that one is perhaps in danger of forgetting her originality and her qualities of intellect. She was by no means a person who leaped easily into the limelight and won cheap and universal applause by doing with dash and bravura and obvious thing. On the contrary, all her early steps were taken in the face of social prejudice and dogged by cavil and ridicule. … It was only her success which acquitted her, and enabled her to secure a definite advance at once for women and for humanity. The great age to which she subsequently attained carried her far into a generation to whom she is only a name, though among the most venerable. But in her prime it was her sheer quiet work and ability which won her battle. The remarkable personal magnetism with which she affected her patients added her halo…. She was in truth, a very great figure – a figure in British history and the world’s history, the like of which does not die every year.

Florence Nightingale is known throughout the whole world as the woman who had the courage to dare and the skill to achieve the tremendous task of organising a hospital service while war was actually raging. In a campaign memorable even in the annals of British statesmanship as an example of colossal incompetence one bright feature stands out, the work of the little band of nurses and their gifted chief….
So long as the spirit of Florence Nightingale animates her successors the work she began will continue to grow in strength and in wisdom.

On the Crimean stage Florence Nightingale was one of the most conspicuous figures. Amid all the welter and chaos of that lunatic war Florence Nightingale’s work stood forth as a triumph of organisation: amid all the incredible disorganisation her work was the one conspicuous success. By saving the lives of innumerable soldiers, she rescued the British Army…. After the Crimean War, though rendered a chronic invalid by her arduous labours, the Government continued to avail itself of her knowledge and experience as a means of reforming the Army hospital system in India and elsewhere. In fact, few men have done as much for the British army as did this one woman in the Victorian era. The fact is worth remembering in view of the primitive contention sometimes put forward that only the fighting sex has a legitimate claim to the suffrage.

By her initiative, by her achievements, by her example, Florence Nightingale will stand for all time as the pioneer of skilled and scientific nursing; no less will her kindliness of heart and tenderness of touch, sympathy for soul and desire to serve the sick and afflicted pass into the region of history. … The career and personality of Florence Nightingale are so important because in her, the apostle of scientific nursing, it was proved that such nursing does not consist in the exhibition of loveable or dutiful characteristics, needful though these are, but requires the recognition of the futility of any struggle against disease which is not based upon the knowledge of the physical causes which underlie the disease, and a recognition of the hopelessness of remedies not direction to the removal of such causes….

It is not often given to a reformer to live till the accomplishment of a great purpose has been brought about. This grace was hers who has passed from us full of years and honour. Once before the world has rung with her praises, when, after her return from the Crimea, the nation strove to express its gratitude. She chose then to turn the national sense of thankfulness to good account in training women to spread the light, and it is true now as ever that those who follow in her steps are her best memorial. Her insight was never clouded. She looked to the next generation to carry on and perfect what had been begun… And she leaves us with a wonderful heritage of hope for the future… her memory will never fade while there are disciples to follow her lead against ignorance, dirt, and disease…

The British Journal of Nursing

It is rare for those who lay foundations to see the great results from their work, but Miss Nightingale has lived to see not only Army nursing initiated on a sound foundation, but the uprising of training schools for nurses in this any many countries, the inauguration of nursing in the homes of the poor in which, both in Liverpool when inaugurated by Mr William Rathbone, and later in connection with Queen Victoria’s Jubilee Institute she took a deep interest; the improvement of nursing in the workhouse infirmaries had her sincere sympathy and support…

Much has been written about Miss Nightingale, not only during the past fortnight when her name has been naturally on everyone’s lips, but through the years which have seen the evolution of the profession of nursing and the entrance of women into some at least of their inheritance, and a great part of what has been said conveys an entirely erroneous impression of her character and the true nature of her power and surpassing influence. She was no ‘smoother of pillows’… She was, before all things, a practical woman, endowed with an almost inspired gift of foresight and originality in thought which she was not afraid to carry into action. This, coupled with her administrative capacity and her excellent education, made her an irresistible force… And we must never forget, in assessing the value of all that Miss Nightingale did, that, though possessed of this good brain and strong will, it was the careful training she had received, first from her parents… and then through her own overpowering desire to qualify herself for ‘God’s work’ that enabled her to rise to the occasion. 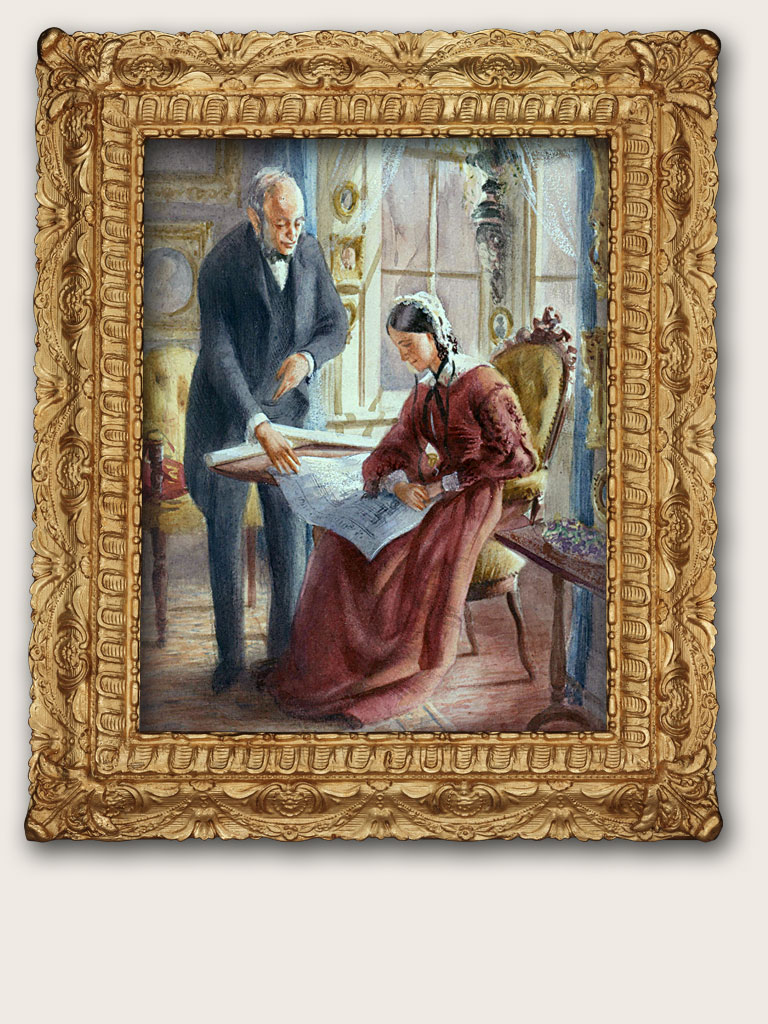