Elsie Malcolm the subject of 42 cartoons, drawn by a patient.

District Nurse Elsie Malcolm was employed by the Cathedral Nursing Society for the Sick Poor of the City of Newcastle-upon-Tyne. During the period 1925 to 1929, she was the subject of 42 cartoons drawn by an anonymous patient of hers, who just signed his pictures ‘Bebe’ or ‘Baby’. One is signed ‘Robson’ or ‘Hobson’. The book of cartoons was handed down to Elsie’s daughter Joy, whose family have shared them with the QNI and allowed us to publish them for the first time here.

The cartoons show how hard life could be for patients in the Jesmond and Shieldfield area of the city where Elsie worked at that time. Many of the pictures show bare floorboards, patrolled by cats and mice. The cartoons are in the style of other cartoonists such as H.M. Bateman, Fougasse, and others of the 1920s. So far, attempts to identify the cartoonist/patient have not been successful.

The cartoons shed some light on the patient psyche, and the nurse-patient relationship. Nurse Malcolm is sometimes referred to as ‘Hard-Hearted Hannah’ in the cartoons, and at other times as ‘Nurse Bluestone’. Jars marked ‘Bluestone’ and ‘Peroxide’ appear in several of the cartoons – ‘Bluestone’ was probably copper sulphate solution. Nevertheless, the patient was obviously greatly impressed by Nurse Malcolm and the cartoons are intended as a tribute to her nursing ability.

The humour of some of the cartoons is slightly macabre. Doctors occasionally appear as visitors and it may be that the patient was being prescribed morphine or other powerful painkillers, which helped to stimulate his powerful imagination. Unless more can be discovered about the mystery cartoonist, this can only be conjecture, as we know nothing of the medical condition from which he was suffering. 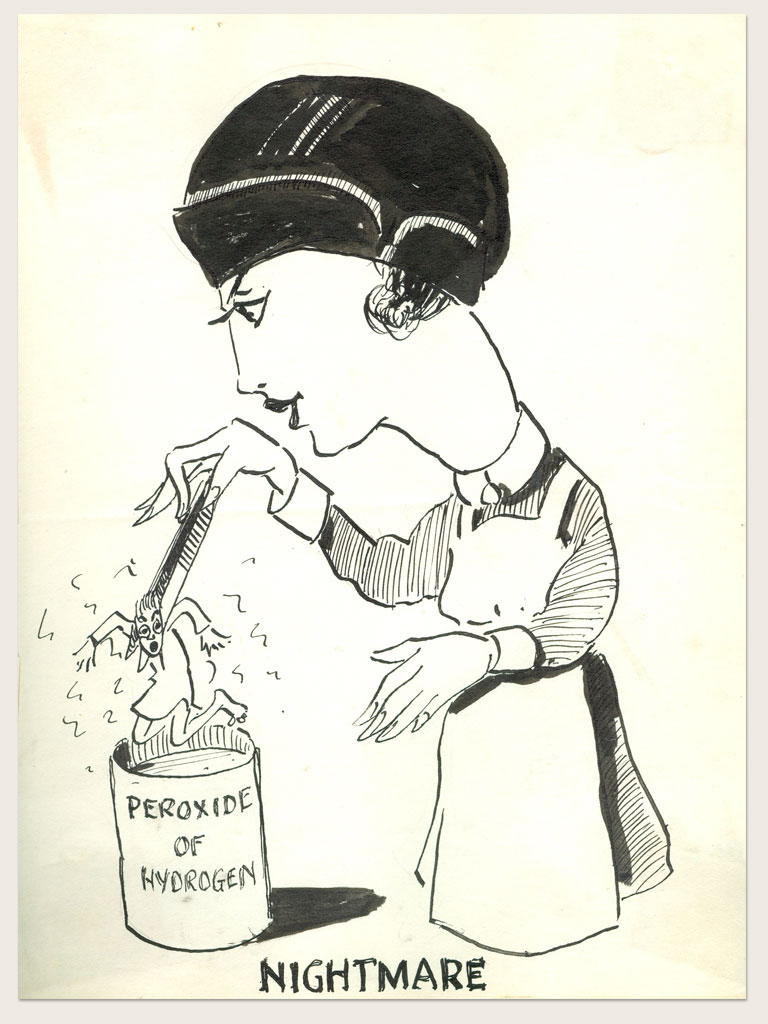